If the cowboy is king in the literature of Wyoming, then a woman homesteader is queen. In the 1910s and 1920s, one such woman, Elinore Pruitt Stewart, wrote about her homestead experiences in southwestern Wyoming in numerous letters and stories. Two collections of her writings were published as Letters of a Woman Homesteader and Letters on an Elk Hunt, securing her position as a significant figure both in Wyoming history and in its literature. As a single woman homesteader, Elinore was not unique. Single women claimed roughly 12 percent of all homesteads in the western states. Though their personal reasons for homesteading varied widely, the desire for independence often dominated the letters, diaries and memoirs they wrote. This desire was strong in Elinore as well.

Elinore was born June 3, 1876, in the Chickasaw Nation, Indian Territory, in present-day south central Oklahoma. Her father was killed in the late 1870s while serving in the military on the Mexican border. Her mother, Josephine Courtney Pruitt, married her husband's brother, Thomas Isaac Pruitt, shortly afterward. With him, Josephine had eight more children.

Elinore's formal education consisted of just a few years of grammar school at the Pierce Institute near the community of White Bead Hill where her family lived. After the school closed in 1889, Elinore taught herself to read and write from whatever materials came to hand. In 1893, Josephine died of complications from childbirth; Thomas died the following year in a work accident, leaving 18-year-old Elinore in charge of the five youngest of her siblings.

In 1902, 26-year-old Elinore married 48-year-old Harry Rupert whom she had met at her grandmother's home. Together, they filed on a homestead in Indian Territory. The marriage did not last long, however, and three years later, Elinore left for Oklahoma City where she found work as a domestic. Her daughter, Mary Jerrine, was born there in February 1906.

In the fall of that year, Elinore moved to Denver, looking for domestic work. Eventually, she found a full-time position as nurse and housekeeper for Mrs. Juliet Coney, a widowed schoolteacher from Boston.

By early 1909, Elinore, determined to make a more permanent home and livelihood for herself and her daughter, decided that homesteading was the best way to achieve her goal. A priest at the Sunshine Rescue Mission in Denver advised her to look for a position as a housekeeper for a rancher as a good first step, and Elinore's employer, Mrs. Coney, agreed.

In March, Elinore saw an advertisement in the Denver Post for a housekeeper sought by a Wyoming rancher, Clyde Stewart of Burntfork, a hamlet in the southwest corner of Sweetwater County near the Utah line. He needed help running his homestead ranch after his wife died. Elinore responded immediately.

Stewart had grown up on a farm near Boulder, Colo., and his widowed mother still lived there. He and Elinore first met by appointment in Denver, then Elinore traveled to Boulder to meet Clyde's mother. Clyde offered the position and Elinore accepted. Within a week, Elinore, Jerrine and Clyde traveled together by train to Carter, Wyo., near Fort Bridger, and from there by wagon to the homestead at Burntfork.

In May, Elinore fulfilled her dream by filing on a 160-acre homestead adjoining Clyde's. Clyde built a twelve by sixteen-foot addition to his house across the property lines of the two homestead claims to serve as Elinore's cabin. The house not only met the residency requirement of the homestead law; it also signaled the joining of Elinore's and Clyde's lives; they married later that month. Under the Homestead Act, single women could claim government land in their own names, but married women could only claim jointly with their husbands. The act also required that claimants live on the land five years before they could take full title. But the law also required that husbands and wives filing on separate homesteads maintain separate residences. Thus, in 1912, Elinore regretfully relinquished her homestead claim to her mother-in-law rather than jeopardize losing it because of the homestead law's requirements.

With Clyde, Elinore had four sons, the first of whom died shortly after birth, and a daughter, who also died as an infant.

Letters to a friend

Elinore shared her experiences as a homesteader in the lively letters she sent to her former employer, Mrs. Coney, picturing life in her rural Wyoming neighborhood. Although she initially kept her marriage secret from her friend, Elinore happily described her new homestead, writing, "Well, I have filed on my land and am now a bloated landowner."

Interestingly, Elinore represented herself as single until several years into the correspondence. She told Mrs. Coney later that she delayed telling her about the marriage at first because she so wanted to be independent and claim her land on her own.

Over the next few years, Elinore wrote to Mrs. Coney frequently. The letters often consisted of stories about local characters, about Elinore's own adventures, about neighborhood comedies and tragedies, all told in an informal and lively style. The image that emerges in the letters is of a cheerful, enthusiastic, hard-working woman who embraced her new life and who had a gift for observing human nature.

Several years into the correspondence, Mrs. Coney, during a visit to Boston, showed some of the letters to her friend, Ellery Sedgwick, editor of The Atlantic Monthly magazine. Sedgwick, eager to expand his audience, saw the merit of Elinore's letters and published them in a series between October 1913 and April 1914. In 1914, Houghton Mifflin published the series in the book Letters of a Woman Homesteader with illustrations by N.C. Wyeth.

The letters were frank, vivid, eloquent and perceptive. “To me,” she wrote on Jan. 23, 1913, “homesteading is the solution of all poverty's problems, but I realize that temperament has much to do with success in any undertaking, and persons afraid of coyotes and work and loneliness had better let ranching alone.

“A the same time, any woman who can stand her own company, can see the beauty of the sunset, loves growing things, and is willing to put in as much time at careful labor as she does over the washtub, will certainly succeed, will have independence, plenty to eat all the time, and a home of her own in the end.”

Both the magazine pieces and the book brought Elinore enthusiastic responses from a nationwide audience of readers and reviewers. The success of the book took Elinore by surprise, for she considered her lack of formal education a real handicap as a writer—a challenge she overcame by voracious reading.

Encouraged by the success of the first series of letters, Sedgwick commissioned a second series of letters to be published in 1915. Elinore wrote them during an elk hunt in the fall of 1914.

The elk hunt letters were clearly written for a public audience, unlike the early letters to Mrs. Coney Once Elinore knew that her letters to her friend were to be published, however, it is likely that she wrote later letters with a broader audience in mind.

After the second series of letters had appeared in The Atlantic Monthly, Houghton Mifflin published them as Letters on an Elk Hunt in 1915. Elinore used her royalty money to purchase much needed equipment and supplies for the Stewart ranch.

By the early 1920s, Elinore was known nationally as the "Woman Homesteader." Her success spurred her on to write more stories for publication. She was glad of the opportunity both to develop herself as a writer and to earn income to help support the ranch. At the same time, her popularity with readers brought her many new correspondents from all over the country. She developed friendships with a few of these and continued to correspond with them throughout her lifetime. In those letters, as in the initial ones written to Mrs. Coney, Elinore incorporated incidents and scenes from her life in what she called her "blue and gold Wyoming."

One of the personal highlights of Elinore's life as a writer was being included in Grace Raymond Hebard's Map of the History and Romance of Wyoming, a literary map of the state published in 1928.

Elinore balanced her prodigious output of letters and stories with an equally astonishing amount of work on the ranch. In the 1920s, she spent the winter months in Boulder, so her children could attend school. But spring, summer and fall saw her on the ranch, raising gardens, caring for the livestock and haying, and entertaining many visitors who were drawn to visit the famous "Woman Homesteader" in her natural habitat.

She suffered several periods of serious illness in the late 1920s and 1930s. She died Oct. 8, 1933, of a blood clot to the brain following gall bladder surgery. She was buried in the Burntfork Pioneer Cemetery. Clyde and their sons continued to operate the ranch until 1940, after which it was leased. The family sold the ranch in 1945. Clyde died three years later and was buried beside Elinore at Burntfork.

Elinore Pruitt Stewart's legacy is both historical and literary. She lived the adventures she wrote about, documenting the experience of homesteading that was so much a part of Wyoming's history and writing about it with a deep appreciation for her natural surroundings and her human neighbors.

The original ranch house is now listed on the National Register of Historic Places. And the country that Elinore knew so well and wrote about so eloquently still looks much as it did when she arrived as a hopeful young woman determined to make a life for herself and her daughter as a woman homesteader. 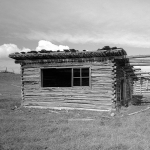 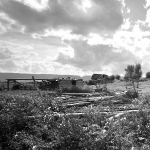 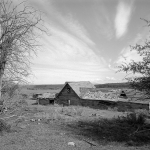 Barbara Allen Bogart, Ph. D., has worked as a historian and oral historian in Wyoming since 1991. She served on the staff of the Wyoming State Museum, has worked as a consultant for several Wyoming museums and historical societies, and was director of the Uinta County Museum from 2003 to 2009. She is the author of Images of America: Evanston (Charleston, S.C.: Arcadia Publishing Co., 2009) as well as In Place: Stories of Landscape and Identity from the American West (Glendo, Wyo: High Plains Press, 1995).