J.E. Stimson and His Photographs

J.E. Stimson and His Photographs Mead was just back from the northern part of the state, where he had been studying irrigation projects; his negatives showed scenes in the Bighorn Mountains. Stimson, born in the South and trained in the Midwest, by this time had a fairly well established portrait business, but hadn’t traveled around Wyoming and had taken few scenic views.

“I asked him if there was much scenery in Wyoming like that,” Stimson told a newspaper reporter four decades later. “’Like that?’ he said, ‘why, man, that’s just a sample of Wyoming’s magnificent scenery.’” Stimson and Mead talked a long time, and Mead offered to take the young man with him the next time he had to tour the state on business. “My life was changed . . .,” Stimson later remembered. “It was Wyoming for me from then on and I have been making thousands of scenic pictures through the years . . .”

Joseph E. Stimson, born in Virginia in 1870, spent most of his early childhood in the Appalachian Mountains of South Carolina. When he was 13, his father moved the family to Pawnee City, Neb. Three years later, Joseph left for Appleton, Wisc., to work as a photographer's apprentice for his cousin, James Stimson. While in Appleton, Joseph learned the skills of portrait photography, details of both the collodian or wet-plate process and the new dry-plate process.

He arrived in Cheyenne, probably at the suggestion of two brothers who worked for the Union Pacific, without a camera, a studio or a clientele. He bought the studio and equipment of Wyoming pioneer photographer Carl Eitner, and in July 1889, Stimson began making portraits.

He first made a portrait of young Anna Peterson of Cheyenne when she was 16; in 1894, when she was 19 and he 23, they married. Their first child, Louise Roe Stimson, was born the following year.

That year, Stimson and Mead made a trip together to the Bighorns. After that, Stimson began to broaden his business to include scenic views. Very few pictures survive from this first decade of his work, however. In the 1930s, when he was moving his studio, a shelf collapsed and hundreds of glass negatives crashed to the floor.

In 1900, the Union Pacific Railroad hired Stimson as a publicity photographer. The railroad had emerged from bankruptcy only a few years before and was just finishing a reconstruction of its main route from Omaha, Neb., to Ogden, Utah. The company needed photographs to help change the image of a scandal-plagued past.

Stimson was paid on a per-picture basis by the railroad, and at the same time was allowed to sell prints to the public. The arrangement gave him free rein to photograph anything that might draw investors to the railway. Travel to the 10 states served by the UP and its subsidiaries was free if Stimson took the railroad, though he often traveled by buggy and, later, automobile. Besides the obvious subject of the railroad itself, Stimson was to photograph natural wonders, city scenes, farms and ranches, mining and irrigation projects, and anything else that might bring money to the newly rebuilt railroad. Already by 1903, Stimson's reputation as a scenic photographer had so grown that he was commissioned by the state of Wyoming to provide five hundred Wyoming scenes for display at the Louisiana Purchase Exposition to be held in 1904 in St. Louis. He worked full time on the project for eight months, traveling the state, developing and printing the results. The prints were to be hand-colored, a skill that Stimson often employed before the advent of color film. At the fair, he was awarded a silver medal for his views of mining and machinery, and two more silver medals for two other displays.

The next year, the Wyoming exhibits and Simpson’s photos were shipped to Portland, Ore., for display at a fair celebrating the centennial of the Louis and Clark expedition. By 1906, after only ten years in scenic work, Stimson had gained national recognition as a photographer and artist.

In 1904, Stimson was doing well enough to buy a lot and build a comfortable house immediately north of the Capitol, on ground today occupied by the Herschler state office building. Anna bore a second daughter, Alice Josephine, in 1905. A third, Catherine Grace, was born in 1910 but died soon afterward.

In the decades that followed, Stimson continued to produce thousands of photographs, including scenes not only from Wyoming, but also from Colorado, Nebraska, Kansas, Utah, Idaho, Nevada and California. Stimson died Feb. 8, 1952 while visiting his sister in Connecticut, and is buried in Cheyenne. He was 82 years old.

The Denver Public Library was very interested in buying Stimson’s array of a lifetime of negatives. After the photographer’s death, however, author Mary Lou Pence and Wyoming State Historian (and Wyoming State Historical Society founder) Lola Homsher urged Gov. Frank Barrett to arrange for the state to buy the collection. In 1953, the purchase came about; the collection includes more than 7,500 photographs, many of them on 8-by-10 glass-plate negatives. The state contributed $1,300 to the purchase; private supporters of the Wyoming Historical Department raised another $700.

“The Collection is actually worth many times what is being paid for it,” Homsher write Barrett, “and will be one of the most valuable ones in this department.”

(Editors’ Note: This article is expanded from one originally published at http://wyoshpo.state.wy.us/westerntrails/index.html#miningtown. Used with thanks.) 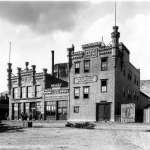 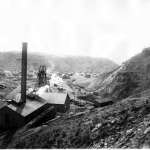 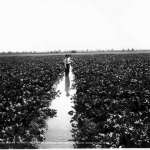 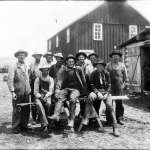 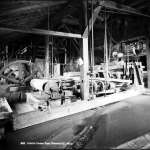 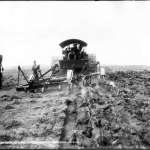 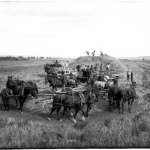 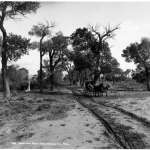 Industry, Politics and Power: the Union Pacific in Wyoming
William Henry Jackson: Foremost Photographer of the American West
Lora Webb Nichols: An Eye on Early Wyoming
Photographer on the Pitchfork: Charles Belden's Version of the West