Journey to Martin's Cove: The Mormon Handcart Tragedy of 1856

Journey to Martin's Cove: The Mormon Handcart Tragedy of 1856

In August 1856, in Florence, Nebraska Territory, two emigrant companies of the Church of Jesus Christ of Latter-day Saints—the Mormons—nearly 1,100 people led by Capt. James Willie and Capt. Edward Martin, left the Missouri River to start a late-season crossing of the plains. The Willie Company left Florence on August 17, the Martin Company on August 27.

Families pushed and pulled two-wheeled, shallow-boxed handcarts, built out of green lumber a short time before. The hot sun and wind were hard on the emigrants and the handcarts. After a few weeks, the green wood began to shrink and crack. Poorly greased wooden wheels shrieked on their wooden axles.

Four months later, the survivors reached Utah Territory. On the way, more than 200 of the emigrants died, crossing what’s now Wyoming as winter set in.

The 1856 emigrants were British and Scandinavian converts en route to the new Mormon homeland in Utah. The first Mormons had arrived there and founded Salt Lake City in 1847, after a decade and a half of increasingly violent persecution in New York, Ohio, Missouri and Illinois.

By the early 1850s, most American Mormons had already arrived in Utah, and the church began actively seeking converts in Europe. Church leaders organized a smooth transit system involving chartered steamships, riverboats up the Mississippi and Missouri rivers and, later, railroad passage from the East Coast to central Iowa. Many emigrants’ passage was supported by the church.

In the mid-1850s, however, drought and famine struck Utah, and suddenly there was not nearly as much wealth in church coffers to support the incoming travelers. To save money and time, church leaders in 1856 urged emigrants use handcarts. The carts were far cheaper than wagons and ox teams, and people pulling handcarts could move more quickly when they didn’t have to wait daily for their livestock to graze.

The handcarts consisted almost entirely of green lumber and had been built in Iowa by the emigrants themselves. They were shallow, three feet wide and five feet long, and held skimpy supplies of food, plus 17 pounds of luggage—clothes, blankets, and personal possessions—for each person. A few ox-drawn wagons accompanied the party to carry tents, more food, and sick people. Rations were one pound of flour per person daily, plus any meat shot on the way. The carts were pulled by one or two people while other family members pushed behind or walked alongside.

Three smaller handcart companies had already crossed the plains to Utah quickly and successfully that year, with the help of supply wagons coming out from Salt Lake City. The crucial difference between these crossings and those of the Willie and Martin companies was timing.

Levi Savage, a sub-captain in the Willie Company wrote in his journal that he warned the party before they left Florence of "the hard Ships that we Should have to endure. I Said that we were liable to have to wade in Snow up to our knees, and Should at night rap ourselvs in a thin blanket. and lye on the frozen ground without abed…the lateness of the Season was my only objection, of leaving this point for the mountains at this time."

However, Savage’s advice was ignored. He explained, "Brother Willey Exorted the Saints to go forward regardless of Suffering even to death," and Savage was later reprimanded for "the wrong impression made by my expressing myself So freely." The weather stayed warm. The two companies were traveling about two weeks apart. As the Martin Company reached what’s now Wyoming, food supplies were running low. To help speed the party, the captain ordered his company to reduce personal baggage from 17 to 10 pounds per person. Many people left heavy clothes and bedding, which were then burned so nobody could smuggle unauthorized items back into their carts.

Sometime in late summer, supply convoys from Salt Lake City were sent east, but failed to meet the emigrants. Records are sketchy and the reason is still unclear; it appears that these supply trains, after waiting some time for the expected handcarters, turned back when the emigrants did not show up.

But in early October, a party of fast-traveling missionaries returning to Utah from Europe, who had passed the Willie and Martin companies on the trails, arrived in Salt Lake City and reported that the two large handcart parties were still on the way. Church President Brigham Young and his counselors in Utah immediately sent relief parties in wagons well stocked with extra food, to find the latecomers and bring them in.

On October 19, the Martin Company crossed the North Platte River near present Casper, Wyo., where the trail left the river headed across country toward Independence Rock and Devil's Gate on the Sweetwater River. That day, a winter storm struck.

The water was shallow, but the river was wide and freezing cold. "[W]e had to travel in our wett cloths untill we got to camp,” emigrant Patience Loader wrote later, “and our clothing was frozen on us and when we got to camp. . .it was to late to go for wood and water the wood was to far away that night the ground was frozen to hard we was unable to drive any tent pins in. . .we stretched it open the best we could and got under it untill morning."

Meanwhile, the rescuers were traveling east. On October 19, they found the stalled and starving Willie group camped in the snow on the Sweetwater River near South Pass. Half the rescue party stayed with the Willie Company. The other half pushed on, and on October 28, three scouts for the rescue party found the Martin company about 100 miles further east, at Red Buttes on the North Platte. In the nine days since the freezing river crossing, the Martin Company, exhausted and nearly out of food in the bitter cold, had moved only a few miles. One of the scouts later noted that fifty-six people in the Martin Company died during that desperate time. Rescuer Ephraim Hanks later wrote, "the starved forms and haggard countenances of the poor sufferers, as they moved about slowly, shivering with cold, to prepare their scanty evening meal, was enough to touch the stoutest heart. . .they hailed me with joy inexpressible. . .there was only one day's quarter rations left in camp."

Hanks and the other two scouts got the Martin Company moving again 60 more miles to Devil’s Gate. There, the rest of the rescuers waited for them at some abandoned traders’ cabins called the Seminoe Fort.

Exhaustion, exposure and lack of food had weakened the emigrants of both the Willie and Martin companies, and many died even after rescue efforts had begun.

The Martin Company camped for several days in a small cove in the rocks that must have given some shelter from the wind, a mile or two east up the Sweetwater from Devil’s Gate. They still had very little food. Two small Mormon wagon trains that had been traveling close behind the large handcart company, meanwhile, arrived at Devil’s Gate about the same time. The people with these trains were also in bad shape and nearly out of food, though better off than the handcarters.

Besides personal belongings, the smaller trains were also carrying commercial freight bound for Utah. A solution became obvious: empty these trains of most of their goods, leave the goods behind at the traders’ cabins, abandon the handcarts, and give the weakest members of the Martin Company a ride the rest of the way. Twenty men stayed at Devil’s Gate to guard the wagon-train goods for the rest of the winter.

With the help of more rescue parties sent east, the Willie Company finally reached Salt Lake City on November 9 and the Martin Company on November 30. A modern historian counted 67 deaths in the Willie Company, a rate of around 14 percent, and 135 to 150 in the Martin Company, a rate of around 25 percent of the company’s members.

It was by far the worst non-military disaster on the emigrant trails. Of the 60,000 or so emigrants who traveled to Utah across what’s now Wyoming before the completion of the Union Pacific Railroad in 1869, about 3,000 used handcarts. Still, the image of a pioneer family pulling a handcart has become a symbol central to the LDS Church’s sense of the power of its faith.

Editor’s note: For an account of the recent controversy over who should own the land at Martin’s Cove, click here.

About 500 starving, freezing members of the Martin handcart company of Mormon emigrants take shelter in rocks near Devil Gate, a place later called Martin Cove.
Gordon B. Hinckley, first counselor to the president of the LDS Church, Riverton Stake President Scott Lorimer and other Mormon officials dedicate a monument to the handcart pioneers of 1856, on BLM land at Martin Cove, near Devil Gate in central Wyoming. 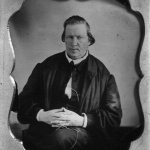 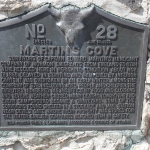 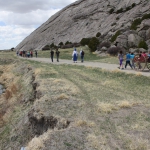 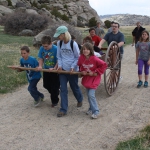 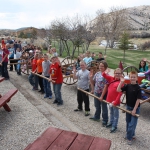