When Bob Wills and his Western-dressed band, the Texas Playboys, appeared on stage at Cheyenne Frontier days in 1952, the sound of the steel guitar was an established element of Western and country music. The sound and image clearly match views of the Cowboy State, as Wyoming is often called, as being essentially and singularly Western in nature. However, the steel guitar first attracted attention in Wyoming a half century earlier and the mood was decidedly not Western. It called up swaying palms, hula-skirted dancers, ocean beaches and sun-drenched Hawaiian islands.

Some have quipped that it was fierce winds and winter snowstorms that made Wyomingites yearn for South Sea breezes. Regardless of the weather, the romantic and exotic strains of Hawaiian music had an appeal that generated a national trend, even in the Cowboy State. With ukuleles, Spanish guitars and steel guitars, traditional music from Hawaii first planted roots on the West coast as Native islanders sought musical opportunities in California. By the late 1890s they were cutting music on wax cylinder records and performing live at many venues.

Wyoming residents became familiar with the music not just through recordings, but through major fairs and expositions. The first impact occurred in Portland, Ore. in 1905. The Lewis and Clark Exposition even attracted the attention of residents in tiny Centennial, Wyo., and all citizens of the state were encouraged to visit that exposition for “Wyoming Cities Week,” July 10 through 15. In addition to viewing agricultural displays and electrical innovations, Wyomingites at the exposition witnessed the arts and customs of faraway Hawaii.

Three years later, Seattle hosted the Alaska-Yukon Exposition. Major performances on music and peoples of the Philippines, Hawaii and the Yukon were among the exhibitions delighting more than 3,000,000 visitors. Wyoming exhibits helped to promote the state and helped to attract many residents to the exposition. By 1915 when the Panama-Pacific Exposition opened in San Francisco, the Hawaiian music craze was well established nationally and in Wyoming. Large numbers of visitors attended from Wyoming. On October 26, 1916, the Douglas Budget, reported that the celebrated Hawaiian Troubadors were appearing at the Princess Theater. They had played throughout the exposition “being selected as the most capable interpreters of their national music” and Douglas residents were invited to “hear the most enchanting, weird and haunting music in the universe . . . and a melodious musical Atmosphere of sweet Hawaiian music and popular American music happily blended.”

How the craze expanded in Wyoming shows clearly the factors that spread popular music. Furthermore, it demonstrates how the Cowboy State has never been isolated from such influences. Music was always offered at Cheyenne Frontier days. In the first decade of the 20th century, brass, cornet and military bands were in high demand and even these could have a western flavor. In 1905, the famed Dodge City Cowboy Band helped draw huge crowds to the rodeo. Change was in the offing. In 1907, Wyoming cowboys ventured to Hawaii to compete in “cowboy contests.” A year later, Hawaiian competitors returned the favor by traveling from the islands to Cheyenne.

Hawaiians also appeared on another Cheyenne stage. For a week, beginning on August 17, 1908 entertainment at the Atlas Theater included acrobats, whistlers and “imitators.” The musical focus was on July Kealoha Paka and his wife “Toots” Paka, a Michigan Broadway actress originally named Hannah Jones. She appeared in costume as a princess of the South Seas. The Pakas recorded for Victor in 1905, gaining wide notice. Significantly, Joseph Kekuku was featured in the traveling troupe on steel guitar, an instrument and playing technique that most writers credit him with inventing. The Cheyenne audience was invited by The Cheyenne Daily Leader to see and hear the Hawaiians, noting that “they are it.” Live performances brought many Hawaiian performers to Wyoming audiences. As a social movement, chautauquas travelling throughout the country brought lecturers, music and preachers to communities large and small. The most common annual circuit for chautauquas touring nationally led them across Wyoming from Kemmerer to Green River, Rock Springs, Rawlins, Laramie and Cheyenne. In the 1917 and 1919 seasons, the Waikiki Hawaiian Quintet and the Royal Hawaiian Quintet were regular features. The latter group was accompanied by a lecture titled “Rambling Through Paradise,” with slides and movie footage along with commentary by Mildred Leo Clemens, boasting that she was a cousin of Mark Twain. Joseph Kekuku returned to the state as a featured performer on steel guitar with the Royal Hawaiians who were promoted by The Laramie Republican on September 5, 1919 with the declaration that they “will sing and play and we will dance.”

Throughout the first three decades of the twentieth century, theaters scattered across Wyoming were actively booking Hawaiian musicians to appear on stage with a wide variety of other vaudeville acts including whistlers, acrobats and jugglers.

Most Hawaiian performances included hula dancers. In Gillette, during the summer of 1917, Princess Pauahi danced at Morgan’s Hall. Kulolia’s Native Hawaiians were popular at the Rex Theater in Green River in 1918 and at the American Theater in Laramie in 1919. Vierra’s Hawaiian singers appeared at the Iris Theater in Casper in 1915 and also played for a dance at the local Masonic Lodge. In 1920 the Princess Theatre in Cheyenne hosted the Lupa Trio. Worland’s Acme Theater, the Princess in Douglas, the Orpheum in Sheridan, the Big Horn Theatre in Greybull and venues elsewhere in the state often featured Hawaiian performers.

Some of the theaters hosted more highly produced stage plays with story lines, music and dance. The Atlas in Cheyenne presented the Broadway musical comedy The Honolulu Belle in 1916. Throughout the 1919 season, other plays were especially popular. In 1912, the release of one production became a major force in furthering the Hawaiian craze. The Bird of Paradise, promoted as “the Play That Made Hawaiian Music Famous,” opened four years later to popular acclaim in Rock Springs at the Grand Theater and shortly afterward in Cheyenne at The New Princess. Viewers thrilled at the climactic scene with a stage set that looked like a live volcano. Competing with this in Sheridan at the Orpheum was a lesser production of A Daughter of the Sun, described in an ad posted by the Sheridan Enterprise as featuring “dreamy Hawaiian” music.

Hawaiian Music in the Home

Throughout the first decades of the 20th century new technologies—especially home radios—continued to spread the popularity of Hawaiian music in Wyoming. Radio connected isolated parts of the state with the rest of the world, with the J. H. Doores ranch a telling example. The ranch was 15 miles west of Neiber in Washakie County. C. A. Olsen of Billings, Mont. installed a radio at the ranch in 1924 that allowed access to evening broadcasts from as far away as New York and parts of Canada. They could even dial in Hawaiian music directly from Honolulu.

Record players provided another means for bringing music to private homes. In Casper a ukulele-playing salesman named Lloyd Flynn demonstrated the latest in Edison record machines and in Laramie the W. H. Holliday Co. sold Edison players (the ones “with a Soul”) along with the latest Edison recordings. Competing with this leading brand was the Brunswick phonograph you could buy at Forbes’s Pharmacy in Cheyenne along with the most recent recordings of the Toots Paka Hawaiians. In Cody, The Western Drug Co. advertised Columbia records with “the Haunting Charm of Hawaiian Music.” Columbia records could be found at Klein Music in Cheyenne and long lists of Victor recordings could be found available in most towns of any size.

But phonographs, costing up to $130, were out of reach for many consumers, and records cost 50 to 75 cents each. Alternatives were available, however. For example, machines were played at establishments such as the Manhattan Café in Casper. In 1923 you could buy Christmas dinner at the Manhattan for $1.25 and entertain yourself by playing Hawaiian records. Schools also picked up on the availability of recorded music. When the Kemmerer school system bought a Victrola in 1916, they stocked a large selection of brass band, classical orchestra, Hawaiian and other styles of music for the students.

Even if families could not afford their own phonographs, they could make their own music. Ads seeking and offering music lessons for steel guitar and ukulele are scattered in the wanted columns of papers. At the end of World War I, the Southern California Music Company posted ads in Jackson Hole, Cokeville, Big Piney, Bridger Valley and elsewhere throughout the state to sell a vast array of sheet music. With your first purchase you received a complete catalog and a free lei. More significantly, The Oahu Music Company of Flint, Mich., sent salesmen door-to-door throughout the country in the 1930s and 1940s offering weekly lessons, sheet music and even instruments branded with the Oahu name. It is no wonder that the music was everywhere. Even inmates in the Laramie County jail in Cheyenne and bell boys at the Hotel Townsend in Casper played Hawaiian music.

Although sales figures wavered later, Hawaiian music out-sold all other styles in the nation in 1916. Popularity for Hawaiian music extended from before World War I in Wyoming until the 1930s and remained a strong presence into the 1950s. Traditional Hawaiian music was supplanted by a steady supply of new songs from song writers and publishers in New York and other urban areas. Hawaiian music, co-opted by the larger world, became an integral part of America. Beginning with deeply rooted late 19th century Native traditions, the instruments and music of Hawaii persist to today in many musical styles. In 2019 the Ukulele Orchestra of Great Britain performed for an enthusiastic audience at the University of Wyoming. Ukuleles themselves became a popular trend in homes and at school performances from Jackson Hole to Cheyenne. Newer technology made support groups and lessons accessible on the internet and YouTube. Many of these little four-stringed instruments are even played by Wyoming cowboys. Steel guitars are still a mainstay with Country, Western and other Wyoming bands. You’re still likely to hear them at Frontier Days—and in bars and honky tonks across the state.

The author would like to thank his music teachers who valiantly attempted to make him a player of the steel guitar. This article would not have been possible without the Wyoming Newspaper project, where search functions allow researchers to follow all kinds of topics, including Hawaiian music.

Recordings from the early to mid 20th century: 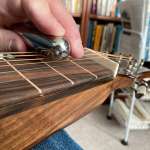 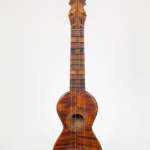 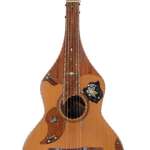 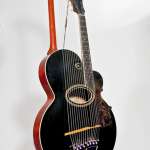 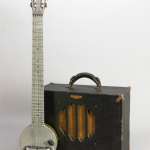 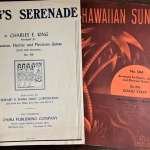 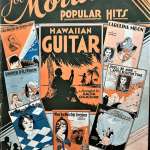 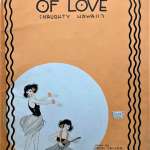 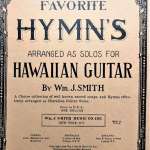 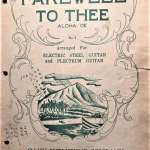 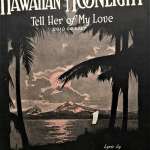 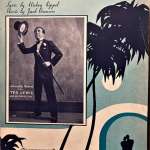 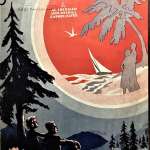 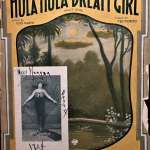 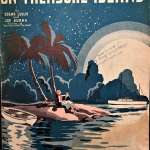 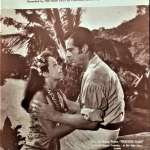 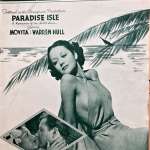 James H. Nottage holds BA and MA degrees in history from the University of Wyoming. He is chief curator emeritus of the Eiteljorg Museum of American Indians and Western Art in Indianapolis and was founding chief curator of the Autry Museum in Los Angeles. Nottage is completing a volume on the history of what is now Wyoming between 1862 and 1866 with a focus on the Oregon, Overland, Bridger, and Bozeman Trails and the military and civilian communities associated with them.

The Atlas Building is a three-story brick structure located on Cheyenne’s 16th Street, a main thoroughfare in what has historically been the heart of Cheyenne's downtown business district. It houses the former Atlas Theatre, later renamed the Strand.