Cpl. Leon Tebbetts, an artist and a New Englander, wanted to provide his fellow soldiers stationed during World War II at the U. S. Army Air Base in Casper, Wyo. with colorful images from Wyoming’s history. To do that, he and three other soldier artists covered the interior walls of the Servicemen’s Club with vivid murals that still can be viewed today. Tebbetts, a Massachusetts native who grew up in Maine, was a writer, book publisher and self-taught artist in civilian life before and after the war. In 1943, on the strength of other murals he’d done on the base, Tebbetts was selected by Capt. Matthew Davidson of Special Services to act as official base muralist and oversee creation of a set of murals to decorate the interior of the club.

The building served as a multipurpose facility for enlisted soldiers and civilians. Soldiers visited the club during the day to relax and read a book or the local newspaper. Kitchen personnel served soda and food for lunch. Tables were located in a small room by the kitchen or in the sunroom along the side of the building.

Evening festivities included jazz performances by members of the air base band, and lectures, some from high-profile celebrities. Jimmy Doolittle, an Air Corps lieutenant general, Medal of Honor winner and leader of the famous Doolittle Raid over Japan early in the war, spoke at the club on one occasion. The great majority of the estimated 16,000 to 20,000 soldiers who trained at the base over the course of the war were not from Wyoming. They trained for a short time, and then many were posted to other bases or sent overseas to fight. This became the driving inspiration behind Tebbetts’ idea for painting a set of murals in the Servicemen’s Club. He planned to give these temporary residents a history lesson on the state of Wyoming before they left.

Knowing the project would be the largest he had ever undertaken, Tebbetts turned to fellow soldier J.P. Morgan for assistance. Prior to the war, Morgan was a successful commercial illustrator for a shoe company. Trained artists were hard to find on the air base.

The two men selected a third artist, William Doench, to help. Doench was the most technically proficient in the group. The fourth and final artist to join the mural project was Pfc. David Rosenblatt. He had no formal art training and had been sent to the base after fighting in Europe. War had taken its toll on Rosenblatt; he had suffered a nervous breakdown. The base psychiatrist thought that art would be a good form of therapy. The doctor asked Tebbetts if Rosenblatt could join the other three artists and help with the murals.

The final concept of the murals was to depict the history of Wyoming in chronological order, from early Shoshone tribal legends to the creation of the Casper Army Air Base.

In October 1943, Tebbetts and the three other three men began working long hours on a set of 15 murals. Word of the project spread fast around the air base, and soldiers began making daily stops by the Servicemen’s Club to witness the progress.

The artists’ primary medium was a relatively inexpensive chalk pastel mixture Tebbetts had worked with on previous projects. The chalks brought problems, however. They released a massive amount of powder in the air. Tebbetts suffered respiratory problems more than once because he inadvertently inhaled chalk powder while working on his mural “The Shoshone Indians Hunting Buffalo.” Chalk pastel was probably not any of the artists’ ideal medium, but supplies were not cheap and the men had to buy them out of their own pockets. Only two murals—“The Union Pacific Railroad” by Morgan and “The Indian Wars” by Tebbetts--were done in oil paint. This decision was most likely a direct result of the chalk-dust problems. Still, the artists could not afford the luxury of oils for the rest of the murals.

The murals were divided among the four artists. “Once each man had selected the particular mural or murals he was to do,” Tebbetts noted in a 1982 letter, “then it was up to him to check for authenticity concerning the period or event he had chosen, as well as the medium in which he wished to work. Each artist had full freedom to express himself, staying within the boundaries of historical fact.”

The first murals in the series were a closely linked pair, “Early Arapahoe Legends” and “Shoshone Hunting Buffalo.” Interestingly, Tebbetts claimed the pair made the first mural he completed in the group, but it is signed in the lower right corner by J.P. Morgan. Tebbetts noted that Morgan created the “Arapahoe Legends” mural, so it appears they shared the work.

A photo survives of Morgan, Tebbetts and Rosenblatt sitting at a table discussing a sketch. If one looks closely enough, it is clear that the sketch they are working on is for this first pair of murals.

One of the most captivating murals is “The Indian Wars,” which tells the story of the struggles between tribes and soldiers between the years 1862 and 1868. Tebbetts’ composition shows absolute chaos on the battlefield. He was inspired by research he did on Caspar Collins, who was killed in 1865 by Cheyenne and Lakota warriors near present Casper, and for whom the City of Casper was later named.

Another powerful mural, Tebbetts’ “Mormon Settlement,” shows a dramatic scene of a group of Mormons pulling handcarts through a harsh Wyoming winter. The composition tells the true story of two handcart brigades bound for Utah in 1856, whose emigrants ran into snow and cold along the Sweetwater River between what’s now Casper and South Pass. Hundreds died, and made famous a place called Martin’s Cove.

Eight months of hard work resulted in murals showing 22 events from Wyoming history in 15 murals. Twelve of the 15 were done in chalk pastel; one was created with chalk and oil pastel; and two were executed in oil paint. The chronology begins in the northwest corner of the building and proceeds from left to right around the main hall. First come the early Arapahoe legends, followed by Mormon settlement, westward expansion, Indian Wars, railroads, women’s suffrage, ranching and the Casper Army Air Base, to name just some of the topics.

After the murals were finished, Casper’s citizens were invited to view them. People were amazed and excited by the murals when they first saw them June 30, 1944, at an open house at the Servicemen’s Club. Soon a wide array of important military figures made the effort to stop in and have a look. Wyoming Gov. Lester C. Hunt even wrote Tebbetts a letter in 1944 showing his appreciation for the murals, stating “I shall feast my eyes again on them on my trip to the Casper Air Base on the sixteenth.”

Tebbetts wrote in 1982 that the murals had achieved their purpose. “They were done as an expression of goodwill towards all the people of Wyoming,” he said. “They were our gift and our thanks for the warmth and kindness shown to all the GI’s at the Base by the civilian population of the State.” The Servicemen’s Club, as it stands today, has been converted into the Wyoming Veterans Memorial Museum, a state-run institution that tells the stories of Wyoming veterans from all wars, branches and ranks through original artifacts and guided tours. Nearly always, the murals are the feature of the museum that visitors talk about most. People of Casper and from out of state have all grown to appreciate the paintings in their current setting.

Much of the Casper Army Air Base deteriorated in the years following the war. About 90 of the 400 original buildings remain. Of those, only a handful are in decent condition. The murals still exist not because of luck but thanks to the dedication of a small group of veterans and one determined former base secretary, Joye Kading. Throughout the decades she fought to have the Servicemen’s Club and its murals protected and preserved.

The building has belonged to many people since 1945. Welders working in the main room exposed the murals to all sorts of air pollutants in the 1960s. Later the building was leased out to a group of square dancers who used the main room as their dance hall for 20 years.

Kading and many other people wrote letters in an attempt to put the Servicemen’s Club on the National Register of Historic Places and to ensure its preservation.

Tebbetts wrote in a letter in 1982 noting that “Two of the four of us who painted the murals are dead, but I speak for us all nevertheless. We wanted then, and am sure would want it now, that the murals and the NCO building [Servicemen’s Club] itself be preserved, and that they, and other memorabilia, belonging to the public, as a memorial to the thousands of men and women who were stationed at the Casper Air Base.” He continued by writing, “Surely there is that one small plot of ground in all the vast land of Wyoming that could be spared.”

Thanks to these efforts, the Servicemen’s Club was placed on the National Register of Historic Places, Wyoming Place No. 386, and designated as a State Heritage Site by the Wyoming Parks and Cultural Resources Commission on Jan. 18, 2000. 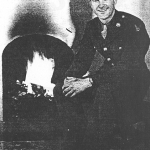 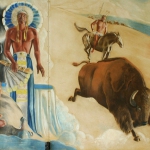 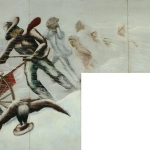 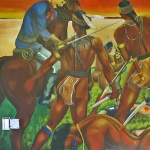 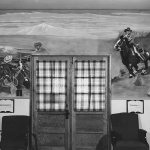 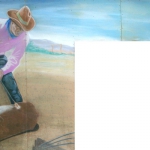 Eric Wimmer is an artist, curator and art historian. He wrote his master’s thesis on the Casper Army Air Base murals, Leon Tebbetts: An Artist Who Chose to be Forgotten, for the University of Denver and is the former curator of the Wyoming Veterans Memorial Museum. Wimmer currently lives in Casper, Wyo., with his wife and kids where he works as a freelance artist and as curator of the Nicolaysen Art Museum.